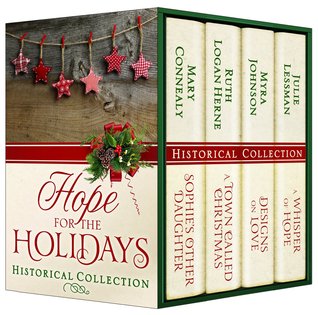 Today I am reviewing A Town Called Christmas by Ruth Logan Herne, one of the four stories found in the Hope For the Holidays historical collection.

Here is the brief synopsis:

Four award-winning and best-selling inspirational authors take you back to times gone by with this heart-warming collection of old-fashioned romance at its best!

From 20th century Boston to the forested hills of 19th century Idaho, these talented romance writers offer a taste of faith, hope and love in this delightful collection.

“Sophie’s Other Daughter” by Mary Connealy

Laura McClellen is just answering a call for her big sister, Doctor Beth, at the Reeve’s home. Ike Reeves shows up for a surprise Christmas visit, exhausted and filthy. Ike claims the right to escort Laura home and outlaws after Ike turn a simple ride into a fight for their lives.

When gruff English pioneer Edward Stillwell offers a former prostitute a job, he gets more than he bargained for: a wagon train more! With winter rolling in, can Sylvie’s faith, hope and optimism be just what the guilt-laden Idaho rancher needs to love Christmas—and people– again?

“Designs on Love” by Myra Johnson.

Ranch foreman Jacob Collins has had designs on Vera Mae Beasley since their schooldays. When the pretty seamstress returns home to settle her late family’s affairs, Jacob hopes his Christmas surprise will win her heart and convince her to stay.

“A Whisper of Hope” by Julie Lessman

With a husband dead set against adoption, Charity O’Connor Dennehy has barely a whisper of hope for more children, but if hope doesn’t disappoint … will it be enough to find a precious bundle under her tree?

Hope For the Holidays historical collection. . . check out these 4 heartwarming stories! – Tweet this!

This was such a good story! It’s definitely one I’ll read again…

I applauded Edward, when he came to the defense of Sylvie Schuler, just recently a wife, mother – and widow.

Now, I could go on . . . and tell you what happens – and it’s really good. But that would ruin the story for you. You’ll just have to read it for yourself – and I heartily encourage you to do so.

Ruth Logan Herne writes such a moving, picturesque, story – that I could see the mountains and the wagons. Sylvia and Edward became real people to me. I expect they’ll do the same for you, when you read A Town Called Christmas.

… if you haven’t entered Ruth’s giveaway contest, you have just a few more days until it’s over!
Ruth Logan Herne Marathon | Giveaway!
Blessings!