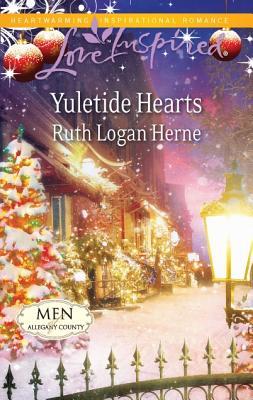 Today I am reviewing Yuletide Hearts, the 4th book in the Men of Allegany County series by Ruth Logan Herne.

When Matt Cavanaugh returns to his Allegany County hometown, he’s not as rough around the edges as he used to be.

The former marine is a successful contractor, a man who now believes in the Lord and old-fashioned hard work.

But when he buys a bankrupt subdivision, he discovers he’s stepped on single mother Callie Burdick’s dreams for her family.

And when Matt learns about Callie’s troubled past, he’s determined to rebuild her trust — plus an entire community — in time for Christmas.

In the last story, we met Matt Cavanaugh, who had just invested in a bankrupt subdivision.

This story belongs to Matt, who finds himself in a mess! After Matt discovers he has no crew to help him, does he dare ask the Marek family to help out?

Callie and Matt draw sparks pretty much from the get-go . . . and if I say much more, I might give away too much. One thing I don’t want to do is spoil this book for you. So read it — matter of fact, if you’re looking for it, just pick up the whole series. It promises to be a real winner!

Ruth Logan Herne excels at creating realistic, albeit likeable characters, who grab hold of you — and don’t let go until the end. I’m thrilled to share her books with my readers.

… and don’t forget to click below to find out how you can enter the GIVEAWAY contest!