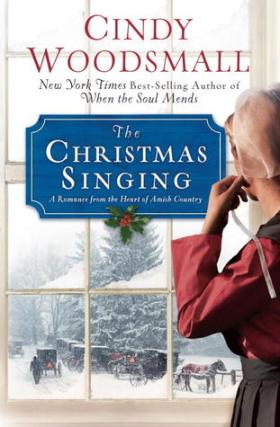 Today I am reviewing The Christmas Singing — by Cindy Woodsmall.

This is the second story in the Apple Ridge series.

After Gideon coldly broke her heart, can the warmth of the season revive Mattie’s hopes?

Mattie thought her childhood sweetheart adored her until he abruptly ended their engagement on Christmas Eve.

Three years later, will learning the truth behind his rejection restore her Christmas joy – or open the door to even deeper heartbreak?

Spend Christmas with the Amish in this story of love, romance, heartache, and restoration.

Experience the holidays with the Plain folk and discover the power of second chances in this touching story from the author of the New York Times bestseller, The Bridge of Peace.

Gideon Beiler has loved Mattie Eash since they were children. But when faced with unexpected circumstances, he makes up an excuse to end their engagement. He doesn’t want to lie to her, but he believes that telling Mattie the truth will be more hurtful.

Brokenhearted, Mattie moves from Apple Ridge, Pennsylvania to Ohio, where she pursues her longtime dream of becoming a cake decorator. She finds a new beau—a man offering the secure relationship Gideon has denied her.

When Mattie is forced to return to Apple Ridge, she and Gideon must confront the suffering created by his dishonesty – and address the powerful emotions that continue to bind the two childhood friends

This story was wonderfully done! I wasn’t too happy with Gideon throwing away the wonderful relationship he had with Mattie to get involved with an English girl until I learned the real reason behind his ridiculous actions.

Is it behind your ear, Mattie Lane?

And his cute little special pet name for her… Mattie Lane! This is way too cute for words.

The fact that Mattie continued to use the special binder full of sketches, pictures, recipes, plus her day planner, said a lot about how her feelings for Gideon are still strong.

When I began this second story from the Christmas in Apple Ridge series, I was disappointed at first, since it took place away from Apple Ridge, with different characters. I quickly found that many of the people from the first story were continuing their story in this book.

I heartily recommend this novel. If you enjoy Amish stories and sequels, you’ll love the Apple Ridge series!

One thought on “The Christmas Singing | Cindy Woodsmall”