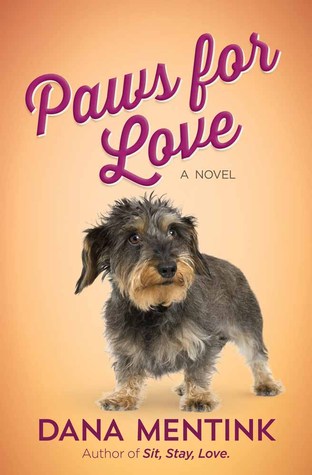 Today I am reviewing Paws For Love… the third book in the Love Unleashed series by Dana Mentink.

The Only Thing Sweet About Jellybean Is His Name. . .

Jellybean the terrier is about to unleash some serious mayhem on the unsuspecting town of Albatross.

There’s no quiet on the set when over-the-hill screen star Lawrence Tucker brings his naughty terrier, Jellybean, on location to the beachside town of Albatross, California.

When Jellybean develops a rapport with Tucker’s violin tutor, the painfully shy, socially awkward Misty Agnelli, her arm is twisted into minding the mischievous animal.

Trailing Jellybean leads Misty into the candy store of Bill Woodson, a handsome chocolatier with a painful secret and a three-year-old niece to raise.

Misty must deal with the unstable Tucker, a temperamental Jellybean, her budding feelings for the mysterious Bill, and the high-pressure atmosphere on the set. Though she wants nothing more than to flee, how can she tell her Grandma, Lawrence Tucker’s biggest fan, that she abandoned the star and his dog?

It’s actors, animals, and antics galore when Jellybean gives his own heartwarming performance.

Oh my! Paws For Love was the perfect ending to the Love Unleashed series!

Misty Agnelli is having a very rough day. . . she agreed to tutor an actor who needs to appear as if he is a violinist, Then Jelly Bean, his dog, causes havoc on the set! Even worse, the actor and director insist on Misty being the dog’s companion.

Misty doesn’t want to be there anyway. . . but I won’t spoil anything by telling you more than that. Bill Woodson meets Misty when Jelly Bean runs into his chocolate shop. . . and the action doesn’t stop until the very end!

This is such a colorful story, with delightful characters and a sweet, little stinker of a dog that just won’t quit! Get a copy today and read it for yourself.

And if you enjoy entertaining stories about feisty dogs, read the whole series! It’s great!

Dana Mentink lives in California, where the weather is golden and the cheese is divine.

Dana is an American Christian Fiction Writers Book of the Year finalist for romantic suspense and an award winner in the Pacific Northwest Writers Literary Contest. Her suspense novel, Betrayal in the Badlands, earned a Romantic Times Reviewer’s Choice Award. Besides writing, she busies herself teaching third and fourth grade.

Mostly, she loves to be home with her husband, two daughters, a dog with social anxiety problems, a chubby box turtle, and a feisty parakeet.

Find out more about Dana at http://www.danamentink.com.