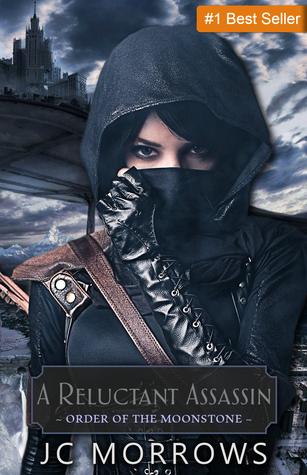 I am reviewing A Reluctant Assassin… the first book in the Order of the MoonStone series by JC Morrows.

Her mission was simple — get close to the Prince, and kill him…

Kayden entered the palace under a lie, one designed to get her close to the Prince. On the outside, she may look like a princess but beneath the mask, a killer lays in wait — for the perfect moment.

Dvarius was not ready to take the crown, nor was he ready for a wife…

But due to his father’s unexpected death and an archaic law — he must find a bride before he is allowed to take his rightful place on the throne.

A Reluctant Assassin is oh-so-wonderful…

It’s the typical “Prince Charming will choose his bride at the ball” story – except for a teensy, tiny twist. One of the ladies at the ball was sent to kill… eliminate… assassinate… the Prince. As the author puts it so eloquently —

“What if Cinderella had been sent to kill the Prince?”

I have always loved the Cinderella stories… one of my favorite movies is Ever After – to me it’s the most realistic Cinderella story ever told. And I have books – lots of books – with princes, princesses, kings and queens. But this is the first book I’ve owned with a prince – and an assassin!

Without making the story a thousand pages, JC Morrows gives the reader enough back-story to stay interesting – just a few hints – while creating intriguing, bigger-than-life characters, who keep the reader – well, reading. And she throws in a plot guaranteed to keep anyone on their toes.

JC purposely leaves out information, such as why Kayden is an assassin… and why there seem to be others whose goal is to kill the Prince. If her intent is to make me eager to read the next story in the series – it’s working!

I’m beginning to feel sorry for the Prince. What has he ever done to deserve this? He hasn’t even begun to rule, and from the looks of things, he may never be crowned.

And… that’s enough to share for now. If your interest is piqued, get the book.

JC Morrows is a talented storyteller – you can tell by the success of A Reluctant Assassin. Although she previously released a short story in this series, Morrow’s success has been tremendous! The day after it released, A Reluctant Assassin reached the #1 spot on Amazon (YA action/adventure) – and it stayed the #1 choice (for hot new YA action/adventure releases) since its’ debut almost 30 days ago.

This story was SO MUCH more than I expected — and I can’t wait to read the rest of the series!

Don’t wait another minute to read this story!

Her mission was simple… get close to the Prince — and kill him! A RELUCTANT ASSASSIN by JC Morrows – Tweet this!

One thought on “A Reluctant Assassin | JC Morrows Marathon”