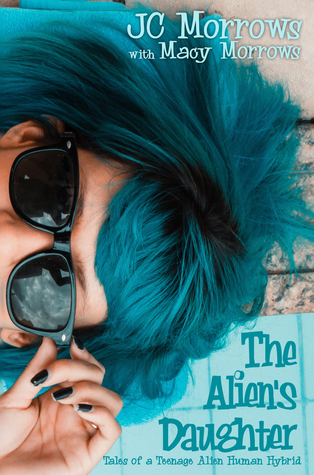 Today I am reviewing The Alien’s Daughter, the 1st chapter book in the Tales of a Teenage Alien Human Hybrid series, by JC Morrows and Macy Morrows.

As if being a teenager isn’t hard enough. . .

Can you imagine how it feels to wake up one day and find out that you are not who you thought you were?

Not to mention all of the crazy new alien gifts you really wish you could return.

Oh well, at least I have an explanation for the blue hair.

So, not only do I get to deal with school bullies this fall, who I’m apparently not allowed to use my new abilities on, I have to keep anyone from finding out my secret. . . and keep my grades up.

Could life get any crazier!

Book one of the Tales of a Teenage Alien Human Hybrid series.

Zoe is a really cool character… with blue hair — and a few new strange powers that have just shown up!

And she has two dads!

Well… not really. But her dad has two very different personalities, so much so that she calls one of them Nice Dad and the other one Not-so-nice Dad.  Personally, I wish Not-so-nice Dad would take a hike!  Unfortunately, if he does, Nice Dad won’t stay around, either. Even if she wants him to…

How does Zoe learn to control her powers? What happens with her dad? Read the story and find out, like I did… and once you do, you’ll want to know more (like I do) and you’ll be anticipating the return of Zoe (and her dads) in The Hybrid Challenge.