Tag Archives: The Promise of an Angel

The Promise Of An Angel | Ruth Reid Marathon 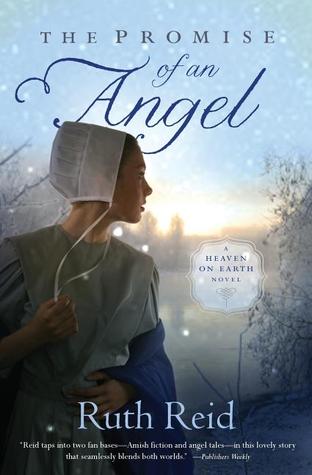 Today I’m reviewing The Promise of an Angel, the first book in the Heaven on Earth series by the incomparable Ruth Reid.

Interrupting the ordered routine of the Mecosta County Amish settlement, an angelic visitor awakens Judith to a new faith.

All Judith Fischer ever wanted is to marry within her community and raise a family. She longs for the day when her parents will allow Levi Plank to officially court her.

But on the day Judith suspects Levi will ask her parent’s permission, her younger brother Samuel has an accident under her charge. Rushing to Samuel’s aid, Judith spies a strange man helping him; a man she later believes was an angel.

When she shares her conviction with her family and close friends, she is shocked to find that no one believes her, including Levi. In the days following the accident, the angel visits Judith with information that may guide her down the path of faith, should she choose to follow.

As her community slowly distances themselves, only one person is willing to stand up for her―the bishop’s son, Andrew Lapp. But can he convince the settlement to listen to her? With a show of faith that flies in the face of her conservative upbringing, can Judith hold strong to the promise that there are even greater things in store for those who believe in God’s miracles?

The Promise of an Angel is amazing — stupendous — incredible! The story is so mesmerizing, I felt like I was there — seeing and hearing everything going on. Eventually, I began to feel like I was in the presence of an angel, too! The story is that powerful!

I began reading this story after everyone had gone to bed… I read late into the night, but eventually had to stop — in order to get a few hours of sleep. The next day at work I finished the book during my lunch break. By the time I was done, my emotions were so charged; I was shaking, with tears running down my cheeks! I quickly made a stop at the ladies’ room to wash my face before going back to my office.

Judith Fischer — I really like Judith! I especially like that she shares her experience with others, even though they don’t believe her — mostly because she’s known for making up stories — and she’s warned to stop talking about it. But really, if you had an encounter with an angel, could you keep quiet about it!

Of course she begins to wonder why her brother is paralyzed — the angel tells her to “have faith, Samuel’s steps are ordered by God.” Although she questions what this means, she believes God is telling her that Samuel will walk again, so she never really loses hope… or faith. Even after everyone tells her she’s crazy and she needs to accept God’s will, Judith still believes.

Ruth Reid is a FANTASTIC author!

I’ve been reading Amish fiction for years, but I never expected a story where a young Amish girl comes in contact with an angel. And the reaction from everyone in the community — except for Andrew Lapp — is the reason! I admit… I imagined it would be a bit “over the top” for a plain, humble community. But it was perfect!

This book really touched me. I can’t wait to get to book 2 — Brush of Angels Wings!

I will definitely recommend this series to everyone.

The Promise of an Angel… a story of an extraordinary event! – Tweet this!

You can find more about Ruth on her website… HERE

And don’t forget to click below to find out how you can enter Ruth’s GIVEAWAY contest!

And don’t forget to click below to find out how you can enter Ruth’s GIVEAWAY contest!

I am dedicating the month of FEBRUARY on my bookshelf blog to:

Ruth has graciously offered to sponsor 3 weekly giveaways
and 1 (one) GRAND PRIZE giveaway!

ONE WINNER will be selected each Saturday during the month… these 3 WINNERS will each receive one of Ruth’s inspiring books — autographed — and sent to you directly from the author!

The GRAND PRIZE WINNER will be selected (and announced) on the last Saturday of this month… February 28th… and will receive three of Ruth’s books!

Don’t miss this opportunity to win a book by RUTH REID – Tweet this!

For a chance to win one of Ruth’s books, do the following:

** Please put your first name in your comment (but don’t put your email address!)

Now go enter! And tell all your friends about this contest!

Want to WIN an inspiring romance novel by Ruth Reid? – Tweet this!

Please remember that giveaways are limited to US residents only. Visit my giveaway rules page for a complete explanation of the terms and conditions of this giveaway.